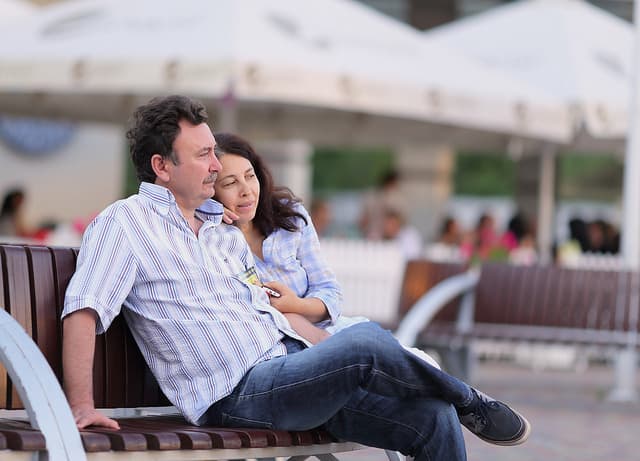 This is a story about a married couple named Jed Johnson and his wife Trudy and how counseling at Texas Marriage Retreat helped them with their “happily ever after.” They were married when they were in their early 20s and were head over heels in love. They had a yellow house with a picket fence, two kids named Johnny, age 7, and Tracy, age 11, and a dog named Jethro. Everything was great. They had their “happy ever after.” Then one day Jed was offered a job in the gas and oil business and started working out of town. H would be out of town for two to three weeks at a time. The money was great, and it seemed like a blessing at the time. They would spend long hours talking on the phone and Skyping in order to fill each other’s needs, and they never thought of the need for couples counseling. The first couple of times Jed came home, it was like a honeymoon all over. The house would be cleaned, and Jed could just sit back and enjoy his time off. Trudy was happy to see him and expressed great joy the first couple of nights at home. The kids could not get enough time with daddy, and they would all play and get along great. Then something started to happen as time went on. The phone calls became shorter and shorter. When Jed came home Trudy would talk in harsher tones, not necessarily mean, but there was an undertone of something there. The house was not as neat, and the kids start having problems at school and seemed angry for no reason. Jed and Trudy both saw the problem but weren’t sure what the problem was, and they weren’t sure what to do about it. They started to think about marriage counseling but did nothing about it. Trudy was starting to feel a little taken advantage of because of some of the things Jed would have normally taken care of was now all her responsibility. She did the household chores, mowed the yard, washed the cars, paid all the bills, and took care of the kids. In her eyes when he came home he was a bum and she was tired of it. This resulted in Jed feeling no love or appreciation, so he started going out at night with the single guys while on the job sit and would sometimes talk and text to other women about his troubles at home.

Then one day Jed and Trudy got into a big fight. The next day they were Googling marriage retreat, marriage counselors and couples counseling which led them to Texas Marriage Retreat. They called and talked to friendly people who understood the problem and could partner up with them to find a solution to their problem. The first thing they did was set an appointment for their own private 18-hour retreat with two counselors. Before they made their way to Weatherford, Texas, Ron set them up with the Prepare and Enrich Assessment to better understand their personal dynamics. On the day of arrival they meet with the Lees for about two hours in order to begin understanding the problem first hand and to set goals for the weekend. Saturday morning, the Lees meet with the Johnsons to go over the results of the Prepare and Enrich Assessment over coffee, juice, a bowl of cereal, muffins, and fresh fruit. After a couple of hours of couples counseling it was time for the one-on-one sessions. In order to relieve the stress of marriage counseling, Trudy was first to get a massage by Texas Marriage Retreat’s licensed massage therapist, while Jed was in session. During the one-on-one sessions, each was given the opportunity to tell Ron or Lexie what they were feeling without worry of repercussions from their spouse. As soon as the hour was up, they switched and it was time for Jed to get his massage and for Trudy to get here one-on-one marriage counseling sessions with Lexie. Then they broke for lunch where they were able to go into town to eat at one of our unique restaurants. When lunch was finished, it was time to get to work on the specifics of the Johnsons’ problem with the professional counselors from Texas Marriage Retreat. The problem on the surface was that Jed was texting other women and had unachievable expectations on the roles that Trudy had. Yes, this was a problem, but the issues went even deeper than that. They were both feeling neglected and taken advantage of, and they did not know how to express their feel without setting the other off in anger. They both liked the money that the new job was creating, but they could not find a way to make it work without feeling resentment toward each other. New expectations of what the home life should be like had to be created as well as a new understanding of the roles of the relationship had to be made as well. This was a task which took about 18 hours and would be hard to do in normal marriage counseling where you meet with a couples counselor once a week for an hour. At Texas Marriage Retreat, they were able to spend the time to get to heart of the problem without feeling interrupted or due to time constraints. Learning new skills that would help them communicate in a way that would take feelings into consideration. The Johnsons were able to go home feeling a deeper love and connection for each other and a new “happily ever after marriage retreat.”